The 24-Hour Giving Challenge is on now!

Help your community foundation grow and your gift will be stretched, with support from The Winnipeg Foundation and the Province of Manitoba.

To preserve and advance the quality of life in the community by developing a permanent endowment fund and making responsible grants for the good of our community.

The Foundation was formed as a direct result of a bequeath from a local area farming couple, Bernard and Iola Goekoop. Our charitable status was effective as of June 12th, 2009. 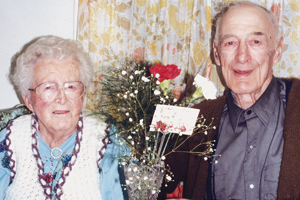 Bernard Adrian Goekoop was born March 8, 1910 on the family farm west of Rivers, Manitoba, to parents Lenard from Gooerderwee, Holland and Francis (nee Kennedy) from Daly municipality. Following the death of their mother, Bernard and his twin sister Anna Marie lived with their Kennedy grandparents, who farmed on the same section. They attended school in Rivers, traveling by school van from the Kennedy farm.

After the death of his father, Bernard took over ownership of the land N1/2 34-12-21 where he farmed for many years. He advertised for a housekeeper and Anna Iola Ferris of Holland, Mb accompanied by her young son Wesley, answered his ad. Iola and Bernard were married on October 16, 1939. Wesley attended school in Rivers but unfortunately died from a sudden illness while still in his teens. There were no other children.

Bernard and Iola farmed on a small scale and lived a simple, frugal life. When the farm was sold in 1976, they moved to a small home in Rivers, and for many years Bernard was the cleaner and sweeper at McKenzie’s store.

Bernard enjoyed the movie theatre in Rivers and often went to the train station to watch the trains and passengers.

He made some trips to Holland to visit family, the first time traveling by freighter because it was the most economical way to cross the ocean. Bernard who was predeceased by Iola, died on January 20, 2008 leaving his life savings to family in Holland and to the Rivers and Area Community Foundation.

© Copyright 2022 The Winnipeg Foundation. All rights reserved.
Menu
Menu
Made with ❤ by The November Group.